422
SHARES
1.1k
VIEWS
Share on FacebookShare on TwitterShare on WhatsappShare on TelegramShare on EmailShare on Wechat

The Apple Watch Series 8 just launched in September and, depending on how close you’ve been following Apple’s wearables, it may have been a bit of a disappointment. It didn’t bring a whole lot of new features on top of what the Series 7 already offers.But you know, that’s fine. We have plenty of tech to follow — having a new watch to upgrade to on an annual basis will make things more complicated. That said — how does the Apple Watch Series 8 compare to the 2-year-old Watch Series 6? They do look kind of similar, though the new one has the larger display up front. But they also have mostly the same sensors, features, and even the same processor humming inside.

So, is it worth shooting for a Watch Series 8 or can you just jump on a deal of a new-old stock Series 6 and call it a day? Should you stress about upgrading? Let’s see:Apple Watch Series 8 vs Watch Series 6 in a nutshell:

For the most part, the Watch Series 8 and Watch Series 6 look very, very similar. The same soft rectangle shape that mirrors the design language of the iPhones up until the iPhone 12 became flat and stark. It’s a nice unisex look that doesn’t get caught on clothes, is easy to accessorize for, and is not too aggressive on the eyes.

The Apple Watch Series 8 has a 20% bigger screen than the Series 6 — not that the whole device is bigger, it’s that the bezels are thinner. It makes it look more prestigious, high-tech, and futuristic, as the screen almost curves into the sides. It also makes it a bit easier to interact with the Watch. 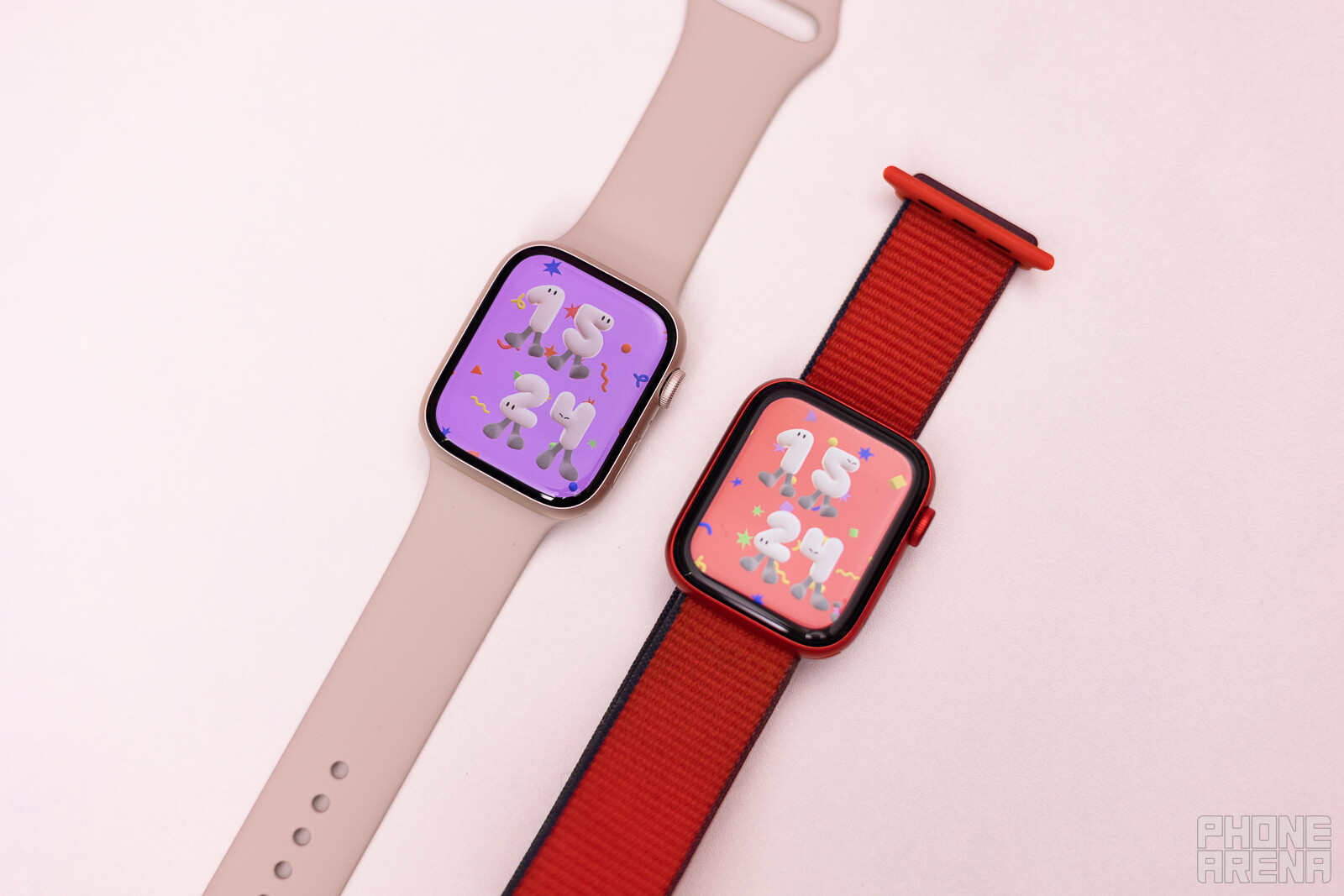 That said, the Watch Series 6 still looks perfectly fine and is fun to interact with — we have been using it for the past 2 years and still actively do so alongside the Watch 8. When the two timepieces are right next to each other, the Watch 6 does look a bit old-ish with its thicker bezel, but we don’t give that another thought when out and about with it on our wrist.

Other than the bezel difference, we have basically the same screens — dense Retina screens made with LTPO OLED panels that can drop their refresh rate down to 1 Hz. Ergo, both Watches support Always-On screens, so the watchface is visible (in dark form) even if you don’t raise your wrist. And both screens can reach up to 1,000 nits for viewability under direct sunlight.

These have niche applications for two new features, exclusive to the Watch Series 8. One is Crash Detection — able to read crashes from the rear, front, side, or rollovers. This feature will call emergency services for you if you are incapacitated — something we hope never happens, of course. The temperature sensor is used only for ovulation reporting and cycle tracking — it is only used to read basal body temperature while sleeping. 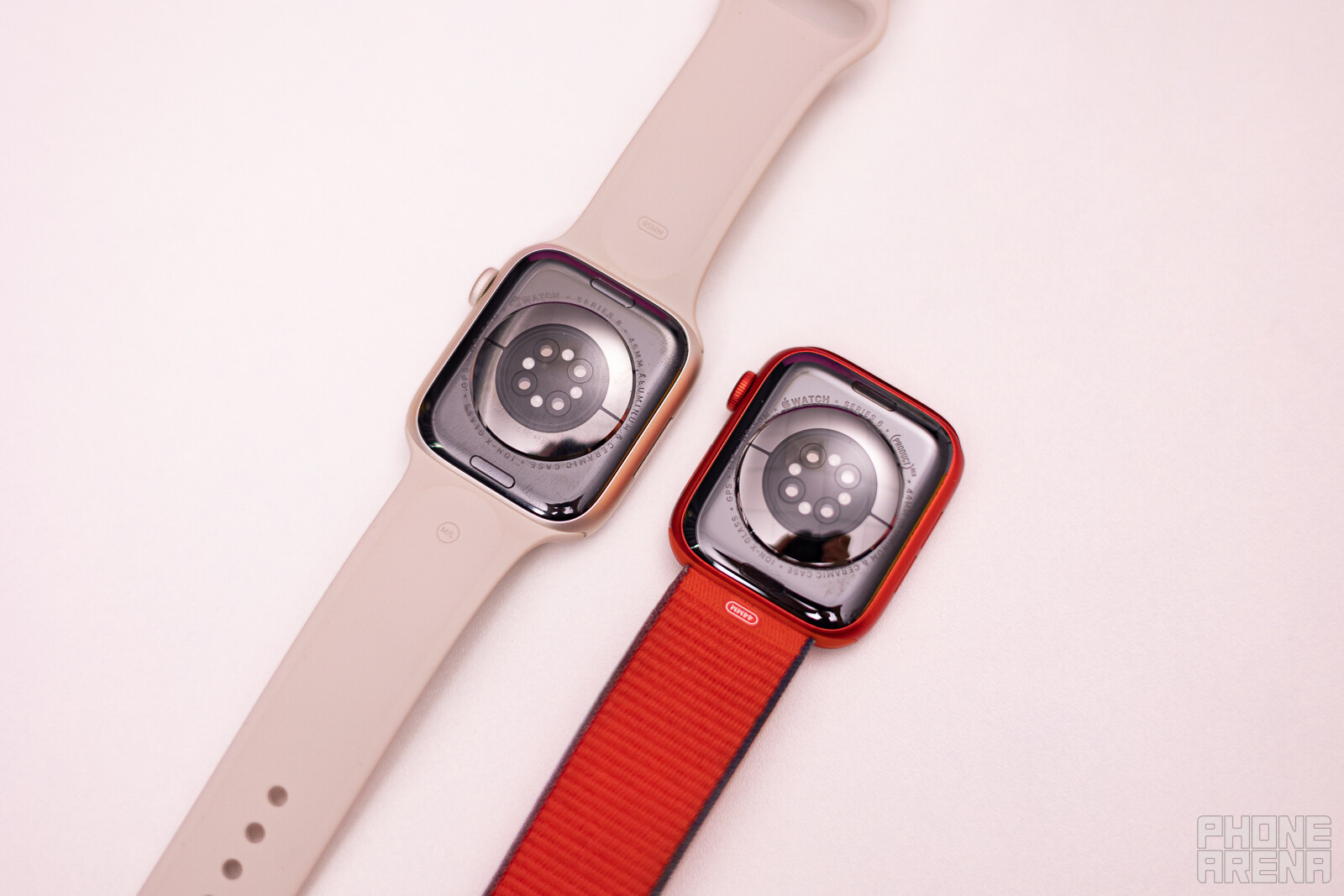 The sensors below (Image credit – PhoneArena)

So, those two features aside, the Apple Watch 6 will get all the new goodies that watchOS 9 brings, just like the Series 7 and Series 8 do. Those being enhanced Sleep Tracking that finally features Sleep Stages (deep sleep, core sleep, REM), custom workout programs that you can edit yourself, Low Power mode, and various tiny quality of life improvements throughout the interface.

Since the Watch Series 6 launched, Apple’s wearables have been sitting on that comfortable “day and a half” battery life — you get about 18 hours of use from them. Plus, you can charge them fast — 1 hour on the puck translates to 80% of battery, half an hour is about 50% charge, when starting from 0%. Any Apple Watch user has become accustomed to just plop their timepiece on the charger when they have a few minutes of down time.

This can be while taking your morning shower or getting ready for a night out — 20-30 minutes on the charger and you are good to go.

With watchOS 9, both these watches also get Low Power mode, which can double battery life. This is different than the Power Saving mode, which turned your Apple Watch into a simple timepiece. Low Power still retains some connectivity, albeit you may receive notifications with a delay. Always On gets turned off, and so do background readings, but the Watch lasts longer. It’s good to turn it on when on a long trek or flight. 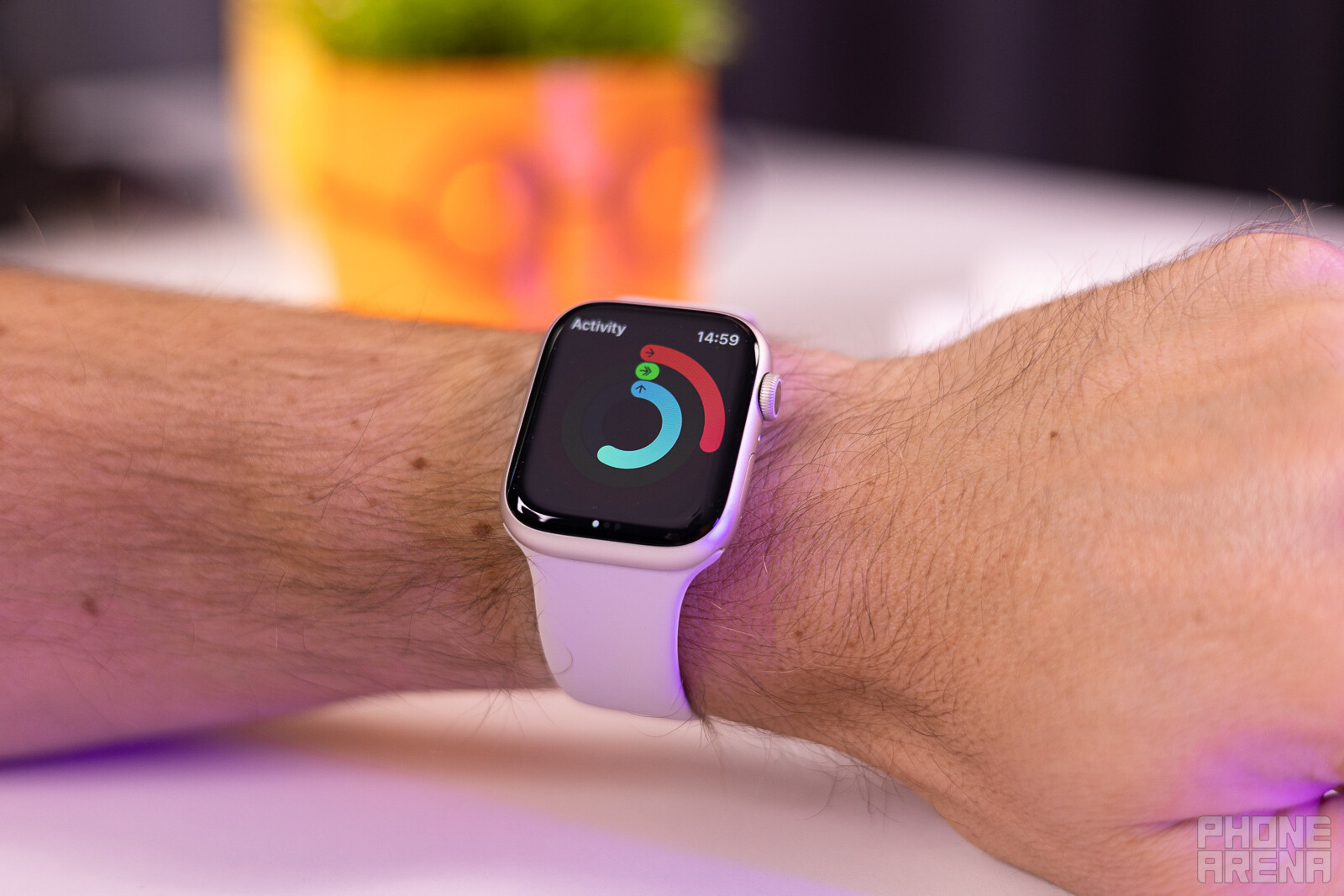 The Apple Watch Series 8 has a new, 8th gen SiP (System in Package), the Series 6 has the 6th gen SiP. But make no mistake — while there are differences in the sensors and, probably, the arrangement of components inside, both watches are powered by the “t8301” processor. It’s a 64-bit, dual-core CPU that still runs perfectly fine — good enough for Apple to ship it with its latest Watch.

The Watch Series 8 and Series 6 both come with 32 GB for some limited file storage — favorite songs, or photos from your iPhone’s gallery. It should be plenty enough to have a few playlists for workouts or studying without needing to lug your iPhone around every time. 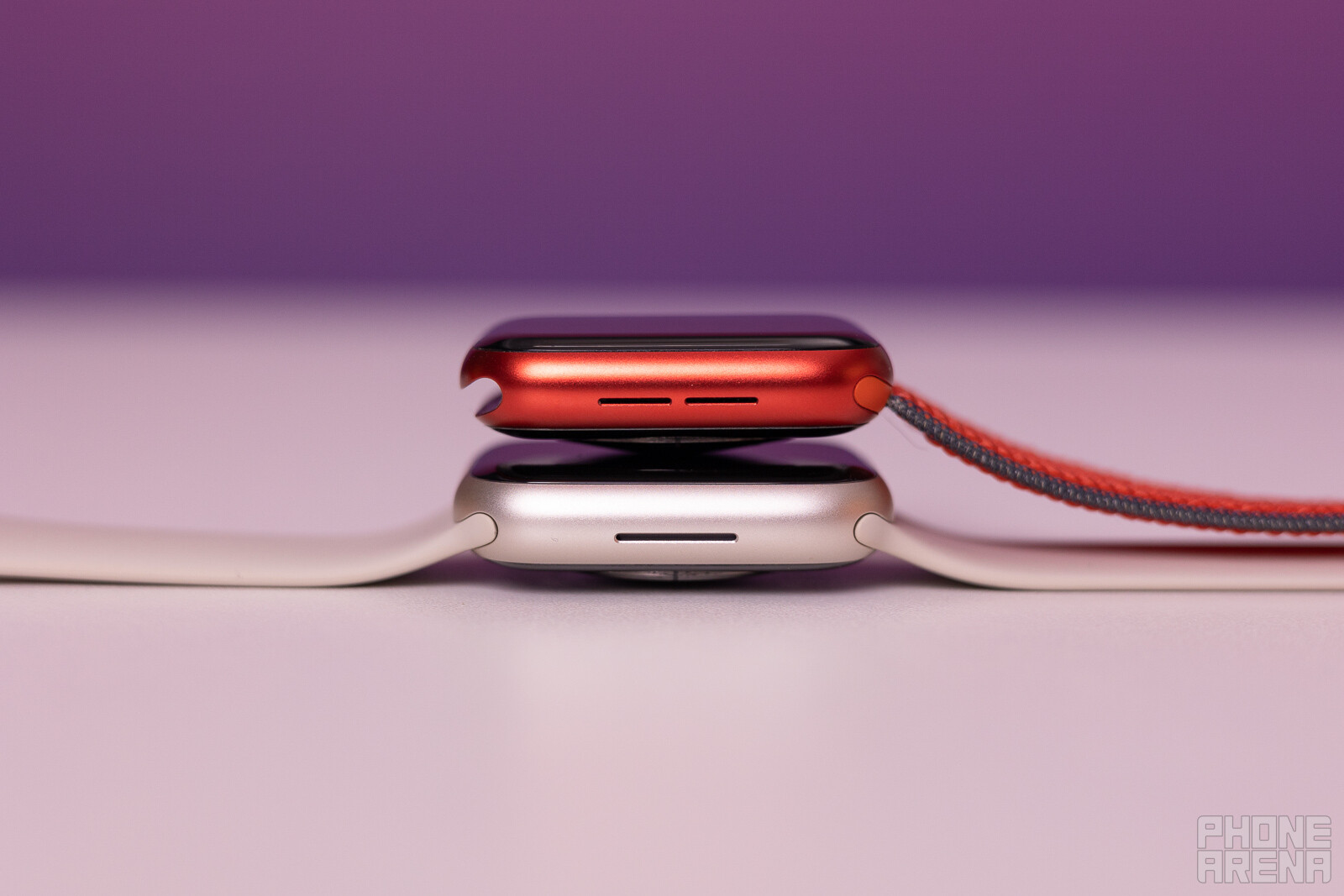 Speaker slits on the side (Image credit – PhoneArena)

Ever since the first generation, the Apple Watch has had an internal microphone and speaker, so you can take calls from your wrist. Such is the case with the Series 8 and Series 6. It’s not super-loud, but the speakers are clear enough to actually understand your call partner. The microphones also do a good job of relaying your voice and we don’t get many complaints, provided we were in a voice call friendly environment.

As for haptics — Apple’s Taptic engine made its debut in the original Apple Watch and is still as excellent as ever. Be it for wake-up alarms, notifications, or calls, it taps, vibrates, and clicks with just the right force and precision.

So, the Apple Watches are already pretty useful wearables — they have a plethora of useful trackers, they can mix, match, and fit any situation thanks to the unintrusive design and huge amount of armbands (1st and 3rd party), they work extremely well within the Apple ecosystem, and they are fast.

Is the Apple Watch Series 8 better than the Series 6? Well… a little bit, arguably. Depending on what you need, we guess. The bigger screen is an upgrade, sure, but the Watch 6 still has a perfectly viewable, pretty-looking display. Ovulation reporting will be useful to a subset of users. And Crash Detection may literally save your life in very specific scenarios, but then again — it’s also supported by the iPhone 14 series, so you don’t need the latest-and-greatest Apple Watch if you do get an iPhone.

All that said, at its core, the Apple Watch Series 6 is as powerful as the Series 8, which means it will serve you well for many more years to come. If you want to save a few bucks, you can just look for a deal on a Series 6 and shop confidently.

That said, there’s no shame in wanting the latest piece of kit — be it because you like the new Starlight color that Apple added to the Watch Series 8 or because you just want all the newest perks.

A complete guide to the new EV tax credit [Latest 2022]

The next OnePlus flagship could arrive earlier than expected, will bring Snapdragon 8 Gen 2 [Latest 2022]

[2022] iPhone 14 Pro Dynamic Island: Brainwashing? Apple did what Samsung and Google couldn’t do!

A complete guide to the new EV tax credit [Latest 2022]